Do you feel that, anon? That lingering feeling deep in the pit of your stomach that something has gone awry? That the things you are being told by "authority figures" simply are not computing with the reality in front of your face? If you've been reading this rag this feeling has probably been lingering for some time now. But it seems as though the global consciousness has reached a tipping point. The pressure being exerted from every angle from those who would like to cattle herd humanity into a dystopian hellscape coupled with the unprecedented access to information that we are afforded today has caused something to crack.

They tried to do too much too quickly and people have started to develop pattern recognition on the go that allows them to recognize when the unproductive class is attempting to manipulate their minds.  This pattern recognition is accelerated and enhanced by our ability to communicate directly with each other in real time over the internet. If you want to get a better understanding of the driving force behind this acceleration I highly recommend you take some time to comb through the thread linked above.

Love it or hate it, it's hard to deny that the "dark corners" of the internet are where some of the most potent commentaries and explanations of today's world emanate from. Over the last decade, the powers that be have put forth a concerted effort to whack-a-mole the dark corners of the internet in an attempt to prevent alternative "wrong think" from percolating into the greater consciousness. This led to many fringe sites like 4chan getting completely neutered or wiped off the face of the Earth. What we're finding is these efforts led to - at best - a slowing down of the alternative information flow and - at worst - an emboldening of those they were attempting to silence to spread their message outside the confines of their "dark corners".

As Aristophanes Phoenix explains in his thread:

They pushed the autist anons to the point of "fuck it, I'm going to begin speaking freely because I'm pretty sure I'm on to something here" and what has ensued is the slow but sure normalization of anti-establishment thought that is no longer reserved for the anonymous sleuths of the world. Agenda 2030, George Soros funding District Attorneys to destabalize cities, the climate emergency hoax, the Great Reset, and a slew of other previously uncouth topics are becoming normalized and recognized as things that are real, are happening, and are actively making life for the Common Man worse off. Leading more and more to become increasingly pissed off by the day as they begin to recognize that they have been completely and utterly duped by central planners who got just-a-tad-bit-too-cocky and attempted to push further than the Common Man was willing to stomach.

Don't you dare try to own anything.

You can't work unless you take these shots.

Sorry, not going to be able to let you in to granny's funeral.

The gym is closed but the liquor store is open late.

We need some of you to lose your jobs to save the economy.

You, over there, no pulling yourself out of poverty by leveraging hydrocarbons.

Call that dude a chick and let him compete against chicks.

Step into this security scanner.

Give us your guns.

Cow farts are killing the planet.

The inflation you think you're experiencing isn't real.

This isn't a recession.

We must aid Ukraine.

Those people wandering aloofly in the Capitol Building are insurrectionists.

Don't ask us about Building 7.

Use this windmill instead of oil and gas.

Iraq has weapons of mass destruction.

Trust us. The banks needed to be bailed out.

Drag queens getting dolla bills stuffed into their thongs for reading your kids books is completely normal.

Look at this feud.

Think about your shortcomings.

It's your neighbor's fault.

The list could go on for days. There has been a neverending barage of complete and utter nonsense that the common man has been subjected to by the mainstream corporate press and the puppets in government for decades that was very effective. But for one reason or another - most likely because of the instantaneous communication mediums we have access to today - more and more people are beginning to shake loose from the mind control they have been subjected to for a long time and say, "Wait just one fucking minute. What the hell have we been doing?! Why are we doing this and why would we continue to do it?!"

As the chorus of the increasing number of individuals who have shook themselves free of the mind wizardry grows louder, the unproductive class who has reveled in their demented ability to control collective thought is panicking and doubling down and losing that control in the process.

We can only hope things continue to accelrate at an even quicker pace. We cannot rid ourselves of these parasites fast enough.

What you're witnessing, freaks, is one of the tell-tale signs of a dying empire. 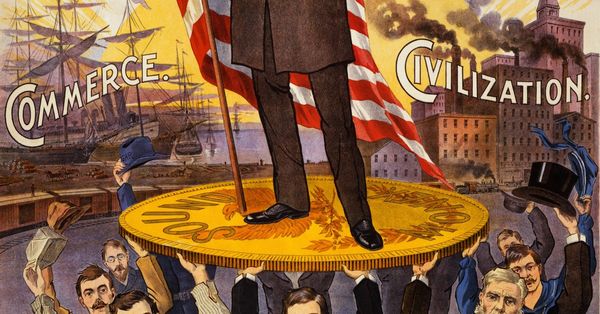 Bear markets are a great time to get back to basics.