We're at the part of the bitcoin bear cycle where those in the mainstream who have derided the new monetary asset running on its own distributed network as nothing more than a ponzi for degenerate speculators and drug addicts are coming out of the woodwork to claim victory. If you've been paying attention to the headlines and talking heads you've likely heard phrases like:

"See, this is proof that bitcoin is too volatile and can never work as a store of value. Who wants to store value in an asset that fluctuates so violently?"

"It can't even work as a proper medium of exchange due to slow confirmation times and the amount of transaction per second that are supported by the blockchain."

These are nothing more than vapid phrases uttered by individuals looking to confirm their flawed biases while hoping that this is truly the bear market that sends bitcoin to zero. The problem for this class of critic is that their view of bitcoin is myopic, wholly focusing on the price at any given time and how rapidly it has fluctuated. While price is certainly an important aspect and a higher price can be viewed as much better than a lower price for bitcoiners, price alone does not capture the fundamental value of the network. A fundamental value that cannot be replicated by any other asset on the planet. As I said in the tweet at the top of this page, bitcoin provides individuals the world over with the ability to easily receive, save, and send money in a self-sovereign fashion.

The fundamental value proposition of the network is control over those three functions. Every other monetary asset on the planet falls short of providing individuals with the type of control that bitcoin can provide. Short-term price volatility at the beginning stages of bitcoin's monetization phase is something I am more than happy with stomaching. Knowing that I actually control my money is a type of peace of mind that a fully "stable" monetary good being controlled by corrupted middlemen simply cannot provide.

I know how my private-public key pairs were created because I made them myself.

I can verify that the bitcoin being sent to my wallet is actually bitcoin.

I can hold that bitcoin for as long as I want without the risk of a bank or payment processor denying me access to my funds because of the particular time of day, my political views, or the need of a bail-in of the failing central banking system.

This level of control is extremely powerful. Despite recent and historical price volatility, I believe that more and more individuals across the planet will slowly but surely come to recognize the fundamental value proposition of this level of control over one's money. No amount of pundit screeching or schadenfreude will change the inherent control that the bitcoin network gives an individual over their money. They can screech and laugh. I'll continue to preach and stack.

The terrible twos were extra terrible (but also awesome) today. The public should know how decisions are being made because those decisions have material effects on the ability for people to save or simply operate within the economy. 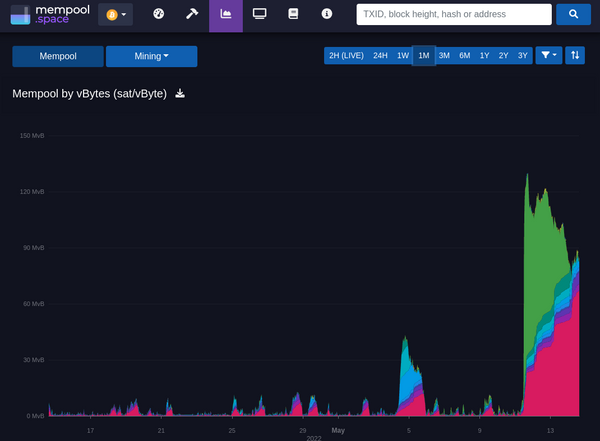