The energy on Bitcoin Twitter is palpable today as we hit the massive milestone of the Bitcoin network passing a $1 TRILLION market cap. Seeing bitcoiners change their avatars to include laser eyes to prepare the world for $100,000 bitcoin is some very inspiring stuff. Though, it certainly seems silly to most people. Many nocoiners are currently looking at what is unfolding on Bitcoin Twitter, scratching their heads, and muttering under their breath, "What the hell are these psychos up to?" As individuals like Senator Cynthia Lummis, Elon Musk and hoards of plebs from all over the world change their profile pictures in unity, those sitting outside are beginning to lash out.

In the last few hours I've seen confused bloggers and blue checkmarks claim that the laser eyes phenomenon is a QAnon meme, a Nazi signal, and an intimidation tactic to bully people. In reality it's just a bunch of bitcoiners having fun on the Internet. Very harmless fun at that.

However, I don't believe the power behind this harmless fun should be understated. What we've seen unfold today is a show of force from the army of sovereign individuals behind the Bitcoin network. People from different countries, races, religions, economic situations, and political beliefs have banded together to show their support for Bitcoin. People who strongly believe that Bitcoin provides a path to Freedom in the Digital Age for everyone. Whether they understand Bitcoin or not at the moment.

The reaction to today's laser eyes movement has proven that there is much to do for many out there in terms of understanding what Bitcoin is and why it's important. The jarring nature of today's harmless fun coupled with the fact that we crossed the $1T chasm has a lot of people focused on Bitcoin. It also has them spitting vitriol at the protocol and the people who champion. Attempting to associate bitcoiners with evil and destruction. These types don't understand that they're walking into a hornets nest of strong individuals ready to meet anyone on the battle of ideas. The lasers and hype are drawing them in.

It's time to keep our laser eyes on the prize and focus on the end goal; freedom. Freedom from tyranny and monetary enslavement in the Digital Age. Things are heating up. See you on the battle field! We have the Truth on our side.

Writing in the car is cool sometimes. 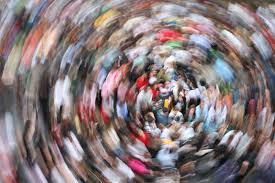