We're witnessing the externalities of a weaponized global monetary system dominated by a sovereign currency in a world that also has an apolitical free market monetary system play out in real time. It seems that Iran is mulling over the idea of buying vital imports with bitcoin to workaround sanctions. This is a big development for a couple of reasons.

First off, it validates one of the game theoretical aspects of Bitcoin that many bitcoiners have been talking about for years; the fact that sovereign states and central banks that are forced in a corner via sanctions will revert to Bitcoin as a means to conduct economic activity. We have been pointing to Venezuela as an example of a State that has already been doing this, but I do not believe they have ever made an official statement about the fact that they are using bitcoin to purchase imports. Iran having an official legislation on the table to make it so miners taking advantage of energy subsidies are forced to send the bitcoin they mine to the Iranian central bank so that it can fund imports is the first of its kind to my knowledge. It will be interesting to see if the legislation gets made into law. I have a feeling it will.

Second, if the legislation is turned into law, we should expect the ultimate FUD to begin emanating from Washington DC from truly useless individuals like Brad Sherman. "The Iranian Central Bank is accumulating bitcoins to evade sanctions" is a headline that is sure to give any freedom-hating congressman who is dead set on trying to bury Bitcoin a hard-on. This could be the development that incites the loudest calls for banning Bitcoin that we've seen to date. It is imperative that any of you American freaks who believe in the promise of Bitcoin speak up against the nonsense that is sure to be spewed. It may also be a great time to begin running a full node and getting your UTXOs off centralized exchanges if you haven't done so already.

Regardless, this is a very exciting development in your Uncle Marty's opinion because it could lead to a true test for Bitcoin, which is ultimately what one should want to see. The protocol was tested in 2017 when a group of industry insiders attempted to sway the direction of the protocol and how it should be developed. Bitcoin survived the test and emerged stronger than ever. This, in conjunction with the push to implement the Travel Rule as strictly as possible on Bitcoin service providers, may be the next big test. If Bitcoin comes out the other end like it did after the fork wars of 2017, that will be massively bullish because Bitcoin's value prop will be validated even further.

Hope for the best, prepare for the worst. Regardless, buckle up, freaks.

I can't believe they tried to censor Glenn Greenwald. 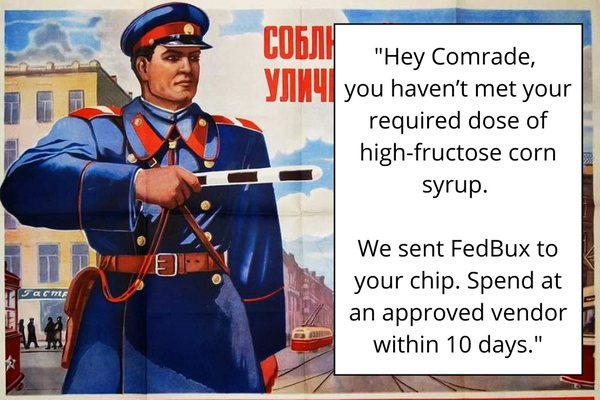 The incumbent system is on a very direct and narrow path towards a world in which the masses are slaves.

Contrary to popular belief, the federal government and the Federal Reserve are not "too big and too powerful" to impede an idea whose time has come.