It's been over a year since we introduced you freaks to utreexo; a proposal that aims to reduce the amount of storage needed for full nodes to store the state of Bitcoin's UTXO set. When we wrote about utreexo then we described the proposal like this;

"The way utreexo reduces the storage burden of full nodes is by separating the network's state size from storage requirements of individual machines. Using a hash-based accumulator to allow nodes to attach hashed proofs to inputs when making a transaction. Helping make Bitcoin nodes a lot more efficient. The tradeoff here is that there will be more network traffic caused by the inclusion of the hashed proof in a transaction input, but Thaddeus explains that the effect of this tradeoff can be minimized by certain aggregation methods. If the net-net at the end of the day is the ability for more people to run and use full nodes, Uncle Marty is all about it."

Well, here we are over a year later and Tadge and team have announced the release of the first demonstration of utreexo. This is a giant step forward for a technology that could potentially help increase Bitcoin's distribution by allowing more individuals to run full nodes.

At the moment, utreexo is being tested on a modified version of the btcd implementation of the Bitcoin protocol and has very limited functionality. Users can only specify an address they would like to import and watch that address using their node. There is no ability to send or receive UTXOs yet. Today's release serves more as a proof-of-concept to build on slowly over time.

If and when utreexo seems to be working smoothly on the btcd, the team working on this will begin thinking of ways it could be implemented in Bitcoin Core.

The sooner people realize this, the sooner we'll be able to actually fix the systemic problems that exist in today's economy.

I threw trash into the marsh by the bay when I was 16 and it still brings me shame to this day. What a little asshole I was. 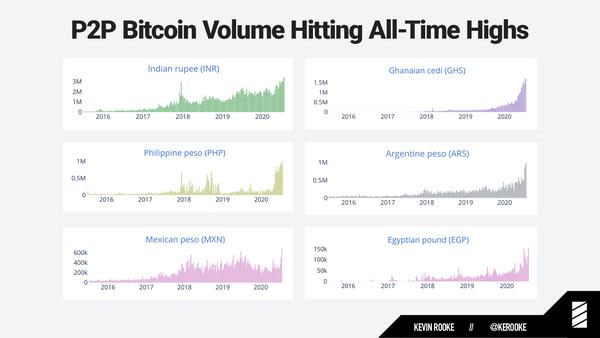 I like to view P2P exchange volume as an indicator to gauge the amount of people dipping their toes into bitcoin for the first time.

There is never a bad day to brush up on your Bitcoin basics. Luckily for you freaks, Danny Diekroeger has been BEASTING Twitter threads.