Increased energy extraction, delivery and conversion into heat and electricity is synonymous with human flourishing. The equation is pretty simple, increased utilization of energy resources allows humans to lever up their working productivity by orders of magnitude. Helping to reduce the time and costs associated with accomplishing certain tasks. The Industrial Age brought with it some forms of automation and the Digital Age took automation to a whole different level. Each advancement in automation opening up opportunities for humans to focus their efforts on other, untapped areas of the economy. This is why we are where we are today; mastering energy and using it to be as productive as possible.

As our friend ShiShi explains, energy use is synonymous with prosperity. Increased access to affordable energy lifts people out of extreme poverty. Individuals can use electricity to do work in less time than would be necessary via manual labor, which allows them to work quicker, and accomplish more work as a result, which results in more income. Actively attempting to reduce the amount of energy utilized by individuals is very anti-human. It is an attempt to force people to do more work than is necessary considering the technologies we have at our fingertips today.

Anti-human sentiment is at an all time high in today's day and age. For a species that has conquered the natural world, erected enormous structures, developed communications technology that connects individuals from around the world instantaneously, and numerous other achievements many seem to think we are some type of plague to be hated. A very perplexing worldview that needs to be banished from our collective psyche. The ability to master the natural world to our own benefit at the scale that we have up to this point in history is something that should be celebrated and cherished as vociferously as possible.

Yes, we have been a bit wasteful with our energy resources at times, but we have consistently gotten better over time and Bitcoin is here to take energy efficiency to another galaxy (potentially literally). Bitcoin incentivizes the production of cheap energy resources and distributed electrical grids. This one, natural incentive that was brought to the world in January 2009 may be the strongest force on the planet we have right now to get the Henry Adams curve back on track. The positive externalities that will emanate from this incentive are going to be profound. Mini grids will be constructed because bitcoin miners will need them and humans in the locale of these mini grids will benefit because these grids will likely have excess electricity that can be utilized for other uses. No joule left behind.

Donda lives up to the hype. Kanye will be on Tales from the Crypt one day. Mark my words.

Miners are only paid when they do some work. There are no free rides. 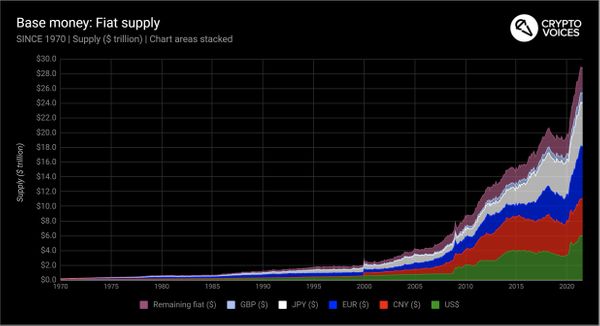 Ask yourselves, freaks. Have prices materially changed since 2008? Are your energy costs, food bills, healthcare costs, education costs and other expenses more than they were in 2008?